Find all the details you need concerning commemorative ceremonies in the blink of an eye either using the up-to-date list below in chronological order or the interactive map for geolocation on its dedicated webpage.

The earliest scheduled ceremonies are at the top of the list. 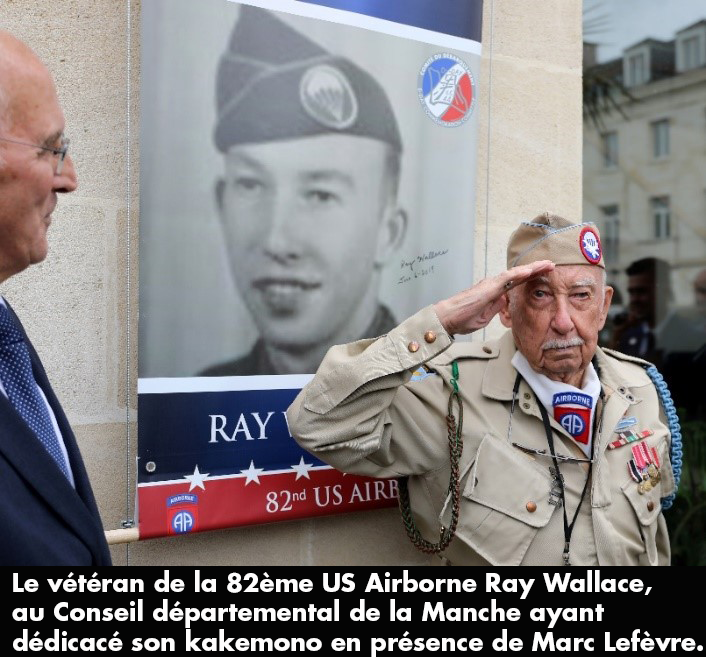 In 2019, the commemorative ceremonies for the 75th Anniversary of the Allied Landings in Normandy were organised by the French state. The D-Day Commemoration Committee, therefore, launched two distinct projects aimed at paying tribute to all those who fought on D-Day to restore liberty to France and to Europe.

The first project began in 2018 and will continue until 80th anniversary in 2024.

“It is for us to make a dignified tribute as a farewell to those veterans who come to visit us. We should therefore show them our gratitude and tell them that we will never forget the sacrifice that they and their brothers in arms made to restore peace and democracy. They gave their youth and, for many, their lives for the freedom that we enjoy today”.

This tribute consists of an exhibition of 950 double sided banners, 120 cms high and 60 cms wide in a durable material, suspended from 4 meter high lampposts throughout the Utah, Omaha, Gold, Juno and Sword Beach sectors, along 80 kms of coast from Saint-Martin de Varreville to Merville Franceville.

Each panel features a wartime portrait of a Belgian, Canadian, American, British, Dutch, Norwegian, Polish, or French soldier, a doctor, or a member of the Resistance, regardless of their military unit.

Every locality chose images of veterans they were keen to pay tribute to.

These banners are hoisted from mid-April to the end of September each year until 2024.

The feedback on the first year’s presentation was excellent from both the local population, which is proud to be associated with the project, and from tourists and the families of veterans whose images were presented.  Most were largely unknown to the public and were for the vast majority very young when they landed in Normandy in the liberation of Europe.